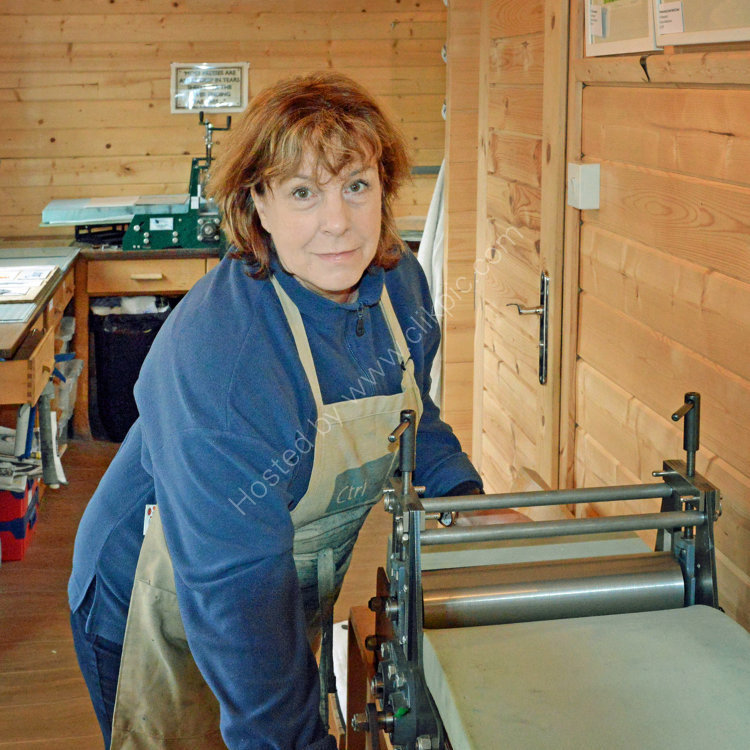 Suzie MacKenzie studied Fine Art as a mature student at the University of Loughborough, before returning to the northern Highlands of Scotland where she now lives and works. In 2013 she attended a series of workshops at the Highland Print Studio in Inverness which rekindled her love of collagraph, and since that time has worked almost exclusively in the medium. She continues to develop her practise and has attended courses and workshops in collagraph run by celebrated printmakers including Charles Shearer (at Leicester Print Workshop) and Nicholas Devison (Edinburgh Printmakers). Suzie draws on her previous career as a teacher as well as her printmaking experience to teach occasional workshops, and has been involved in delivering projects to local community groups. She has described her process for Jackson's Art blog and AccessArt, and has recently written a book on the subject entitled Making Collagraph Prints, published by The Crowood Press in May 2019. She is a member of An Talla Solais, Ullapool, Highland Print Studio, Inverness and the Society of Scottish Artists.

Suzie’s work has been exhibited nationally and internationally and can be seen in exhibitions, galleries and at print fairs across Scotland and the north of England. She has had collagraph prints selected for the Center for Contemporary Printmaking's Tenth Biennial International Miniature Print Exhibition in 2015, Royal Birmingham Society of Artists’ biennial Print Prize Exhibition in 2014 and 2016, the Society of Scottish Artists’ 118th and 119th Annual Exhibitions, and was invited to exhibit in the Master Printmakers show at Leeds Craft Centre and Design Gallery in 2017. Her work is held in private collections in UK, Europe, North America and Australasia.

Collagraph is currently my main medium of choice. It is an endlessly versatile and exciting printmaking medium which can be printed either in relief, or intaglio, or as a combination of both, and is an environmentally-friendly way of making prints which are pulled from textured, collaged plates. I use mountboard as the basis for the plate, cutting into it and peeling off layers, adding artists’ mediums to create areas of texture and occasionally gluing on further elements. When completed the plate is sealed and left to dry before prints are taken from it using an etching press.

Most of the prints are in limited editions, never greater than thirty; I often make 'varied editions' where the same plate is used to print from, but each image is unique because changes are made perhaps in colour, the way the plate is wiped, or by added chine colle elements.

I am currently exploring the combination of traditional printmaking with contemporary techniques in the use of digitally-prepared chine colle papers, which are printed using archival inks on Thai mulberry paper before applying during the intaglio printing process. This allows for a great deal of experimentation with colour and atmosphere.
Next
Previous